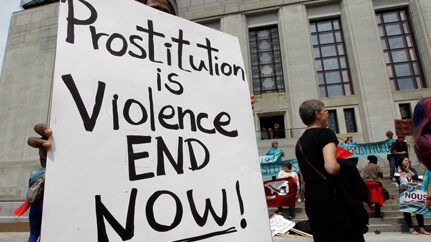 My name is Zenande I am from the rural areas in the Eastern Cape.

I entered into the sex exploitation industry in 2011. I needed money and I was hoping to save that money to return to Varsity as I dropped out due to financial constraints.

I was so young and much in demand. Yet it was always difficult for me to price myself in terms of the services I offered. I came up with a plan to make it easier for me I asked a veteran prostituted woman who was a roommate of mine to put up the prices and she did.

From the onset the rules that I set were not being adhered to by these many men I encountered. It really depended on the money and the fantasy they had and most times they would change from the initial agreement and did as they pleased.

My first violation would be when someone would ask me “uthengisa ngamalini ? “– meaning how much are you selling for?

My heart would throb as I couldn’t give selling my soul to the devil a price and that price would be so disgraceful with my street experience I guarantee that there’s no amount of money that can compensate one for sexual intercourse with unknown males.

The other challenge is the time frame because as long as the man hasn’t reached an orgasm then he can have sex with you for however long he wants. And then there’s that gentle reminder with piercing eyes that says I have paid for having sex with you therefore submit yourself and let me finish “ngikhokhile,ungangijarhi!”  – meaning I paid so don’t rush me! I’ve also experienced being beaten up, raped and money taken back when I failed to fulfil the needs of these men.

The last straw for me was when I had a client for the night who ordered me to go down on him without any protection. He refused to use a condom and kept on bragging to us about how well off he was. He took me and a friend for the night for R2000 each. So our lives were worth a mere R2000.

I had to run around trying to find pep and in every clinic I went to I was told I knew my risk when I started selling my body therefore I cannot get pep. I had to pretend I was mugged and raped; it was easy because I had a blue eye and a broken rib from the struggle with that man so I got my pep. I realised I’d rather remain uneducated or seek any other way than let these men bruise and break me. The fact remains I got bantu education and today my matric is stale as I now celebrate 18 years of matric and nothing else. I am one of the few survivors that have internal scars but HIV negative by the grace of God.

Your ticket for the: ZENANDE STORY: PROSTITUTION IS VIOLENCE AGAINST WOMEN