Working with the youth to prevent sex trafficking 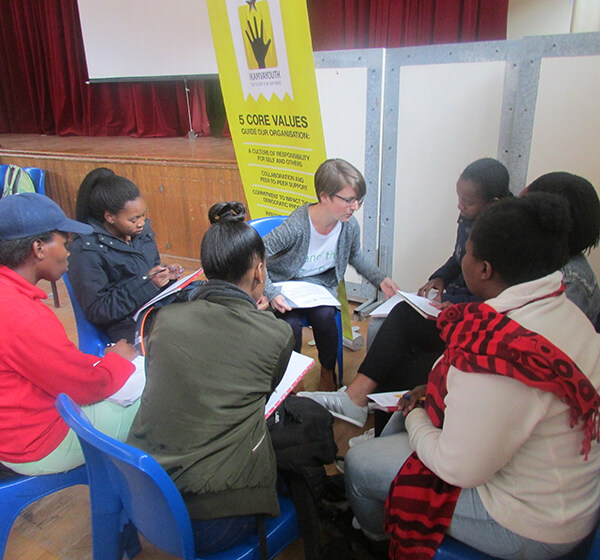 Ikamva Youth, an NGO that “equips learners from disadvantaged communities with the knowledge, skills, networks and resources to access tertiary education and/or employment opportunities once they matriculate”, recently invited Embrace Dignity to conduct two workshops on human trafficking. The workshops involved Survivors like Grizelda Grootboom who shared their personal stories in order to open up a dialogue about trafficking and prostitution for the learners.

Embrace Dignity also used the opportunity to gauge the effect of the presentation on those present and to collect data on the youth’s knowledge of sex trafficking and prostitution through pre- and post-assessments.

“We found that the presentation had an immediate effect on how the participants perceived trafficking and prostitution,” says Savannah Estridge, an intern at Embrace Dignity who was involved in running the training and conducting the assessments.

At the beginning of the first workshop, when learners were asked to indicate where they believed trafficking took place, only 27% of the learners said that it happened everywhere. That figure  increased to 100% – a massive 73% increase – after the presentation indicating that learners grasped the  message shared by Embrace Dignity that young people are especially vulnerable to sex trafficking and other forms of trafficking in society.

“When analysing learners’ responses on how people fall victim to trafficking, the internet or social media was not mentioned at all. Yet 19% of the respondents talked about falling victim to trafficking when walking down the road or getting into someone’s car, indicating that they  associated trafficking with being kidnapped,” says Estridge.

However, when asked what they had learned during the post-assessment, 11% of the learners mentioned that they now understood how individuals could become susceptible to sex trafficking through their online presence on social media platforms.

“This shows that Embrace Dignity is helping learners to realise that while they can fall victim to sex trafficking by being taken against their will while out in public, there are also a multitude of other ways for traffickers to find vulnerable youth. This may involve luring young persons into situations that the traffickers know will appeal to them  through the information they share on their online profiles – for example the opportunity to participate in a film shoot – but with the eventual purpose to traffic an unsuspecting young person,” says Duduzile Ndlovu, Embrace Dignity Coordinator: Public Education and Advocacy.

Estridge adds: “The goals of the workshops were to raise awareness and teach prevention skills. The data that was collected indicates that Embrace Dignity’s interaction with the youth is very valuable in achieving both of these objectives. There were significant changes in the pre- and post-assessments and participants really valued the opportunity to have a dialogue about an issue that they hear about daily.”

Your ticket for the: Working with the youth to prevent sex trafficking

Working with the youth to prevent sex trafficking