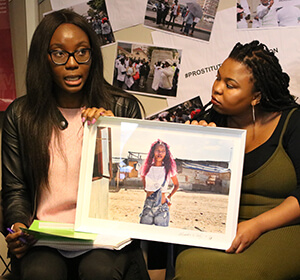 We recently had two groups of students visit Embrace Dignity to learn about the organisation’s mission and how we have helped women in our community exit prostitution. The first group consisted of students from a range of countries across the world and who are enrolled for the Global Affairs Masters Program at New York University in the United States. The students focus on different fields of study in their degree such as development, international law and human rights, transnational security, and energy policy.

“The students were on a study abroad course to learn more about some of the struggles and successes of societal change since the overthrow of apartheid and the introduction of a non-racial, non-sexist democratic government in South Africa,” says Ms Savannah Estridge, an intern at Embrace Dignity who is completing a Masters in Human Rights and International Law with a focus on gender at New York University in the United States.

During the visit the students were told the life stories of the Sisters who had exited prostitution or were in the process of exiting through Embrace Dignity’s Exit Programme. They were also invited to sit through a Sisterhood meeting and hear firsthand accounts of survivors of prostitution and trafficking.

“The students found the visit to be very moving and valuable and were very happy that we were willing to take time out of our schedules to educate them about the work we are doing to end prostitution through law reform, public education and by supporting prostituted persons to exit prostitution. The students were accompanied by their professor, Barbara Borst, who worked as a journalist in South Africa for many years during the late eighties and early nineties,” added Estridge.

Embrace Dignity was also able to host a group of high school learners from Edmund Rice Education Australia who had come to South Africa on a study abroad course to learn about different human rights issues that affect the country.

“We spent quite a bit of time asking the learners about some of the observations they had made when it came to human rights issues in South Africa during their visit. Many of the learners highlighted issues of mass inequality between the rich and the poor, complicated racial relations, as well as gender-based violence as contentious points.”

“We also discussed how patriarchy remains entrenched in all our communities globally and the role of learners in bringing about social change on their own and by joining hands with reputable organisations like Embrace Dignity.”