THE ROLE OF PROSTITUTION IN HUMAN TRAFFICKING 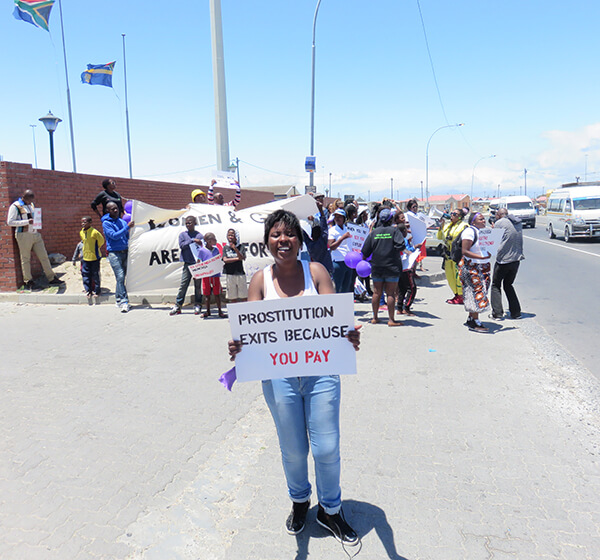 Human trafficking is an epidemic in South Africa and it is becoming more and more evident. Just last week Deputy Minister of Justice and Constitutional Development, the Honourable John Jeffery said that “South Africa has become a source, transit and destination country for human trafficking”[1]. According to the 2014 Global Slavery Index, it is estimated that South Africa has 106 000 victims of modern day slavery. The issue has become so prevalent and the consequences are so devastating that the root causes need to be addressed.

Steps have already been taken to combat human trafficking across South Africa and the entire African continent. In the Protocol to the African Charter on Human and Peoples’ Rights on the Rights of Women in Africa of 2003, Article 4(g) states that there is a need to “prevent and condemn trafficking in women, prosecute the perpetrators of such trafficking and protect those women most at risk”. In South Africa similar language is used in the Prevention and Combating of Trafficking in Persons Act 7 of 2013, accentuating the need to prevent and combat trafficking.

While the country and the international community see the need for prevention and understand the human rights violations and harms in trafficking, we have to wonder if they are failing to address the actual causes.

When analysing human trafficking we need to look at it from a macro level. According to the European Parliament’s Committee on Women’s Rights and Gender Equality, “the sex industry is based on the principle of supply and demand” with demand being the main driving force behind sex trafficking. The sex industry works just like any other market; when there is a large demand for something, sexual services in this case, there is an incentive to get a supply of vulnerable persons to satisfy that demand.

So how can this demand be stopped?

First, we cannot ignore the fact that prostitution and human trafficking are linked. Where prostitution is thriving so is trafficking. The United Nations adopted the Protocol to Prevent, Suppress and Punish Trafficking in Persons and in this protocol it was stressed that the exploitation of persons for sex and the causes of prostitution and human trafficking cannot be separated. The demand for sexual services fuels both. This means that in order to stop one you must stop the other. Ms Sigma Huda, the UN’s Special Rapporteur on Trafficking in Persons, especially Women and Children from 2004 to 2008 clearly articulated this when she said:  “Prostitution as actually practised in the world usually does satisfy the elements of trafficking.”

In fact, the same conditions that define human trafficking are present in prostitution. As Prof Catharine MacKinnon, the American radical feminist, scholar, lawyer, teacher and activist, points out: “The Palermo Protocol definition, which is sweeping the world, includes being sexually exploited through force, fraud, or coercion for commercial sex, all of which indeed occurs in the sex industry”. In addition, says MacKinnon, “trafficking is transportation, transfer, harbo(u)ring, or receipt of a human being for purposes of sexual exploitation: it is straight-up pimping”, an apt description, we argue, for prostitution as well. (2011, p.299).

Prostitution has become an intense topic in South African politics due to the fact that the legislation surrounding the matter is changing. The two strongest views are for either total decriminalisation or partial decriminalisation. Both will have immense effects on human trafficking, therefore the issue of trafficking needs to be at the forefront of every conversation surrounding prostitution. It is impossible to discuss one without the other.

When prostitution is legalised, what will happen to trafficking? According to studies done in various countries and areas that have legalised the buying and selling of sexual services, trafficking is out of control. In the Netherlands, Australia and Germany, where prostitution is legalised, it is estimated that 70-80% of the women prostituted in those countries were actually trafficked. When the sex industry is legalised it is accompanied by an explosion in organised crime and  a rise in child sexual exploitation (Raymond,2004).

Total legalisation does not address the root causes of trafficking and exploitation. Instead it allows the demand for sex to grow, thus growing the trafficking industry.

Partial criminalisation refers to a law which allows the police to arrest persons purchasing sexual acts for contravening the law while persons who are selling sex are free from prosecution. The aim of partial decriminalisation, also referred to as the Equality Law, is to address the main cause of exploitation in prostitution – the buyers. The Equality Law criminalises parties that create the demand for sexual services such as those who buy these services as well as “pimps” and owners of brothels.

Sweden enacted the Equality Law in 1999 and has since seen a massive impact with regards to human trafficking. According to Huda, the law in Sweden has directly limited sex trafficking. The sex market in Sweden is no longer profitable because the demand is no longer there. It has therefore been proven that enacting the Equality Law addresses the demand that fuels the sex industry, limits the market and diminishes trafficking.

Human trafficking is a worldwide issue that South Africa is not immune to. It affects every aspect of society and it needs to be addressed at the macro level, paying attention to the influence the sex industry has in its augmentation. Once policy makers and government officials realise that the fight against human trafficking cannot be separated from prostitution, maybe then will we start seeing real results in ending this inhumane practice of trafficking vulnerable persons.

Your ticket for the: THE ROLE OF PROSTITUTION IN HUMAN TRAFFICKING

THE ROLE OF PROSTITUTION IN HUMAN TRAFFICKING