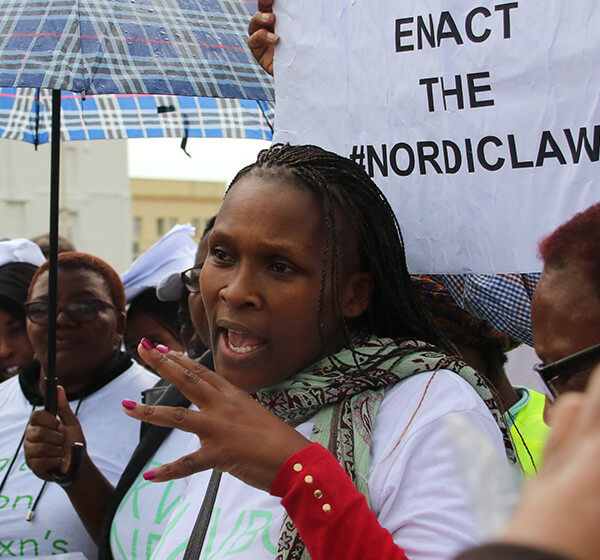 That South Africa is a war zone for women and children is beyond question. Nothing could have driven this message home more effectively than the brutal murder and rape of Uyinene Mrwetyana, a 19-year old UCT student who had gone missing after she went to collect a parcel from the Post Office. President Ramaphosa has called it a “watershed moment” for South Africa as we try to grapple with the pandemic of gender-based violence. Despite the national outcry, the killing of women continues unabated.

In the Equality Law those who are bought and sold for sex are not criminalised and are offered support for exit. The buying of sex is criminalised, so too are pimping, brothel keeping and third party profiteering. This shifts the criminality and stigma from vulnerable women and girls, to those who exploit and exercise financial power over them.

The Equality Law targets the demand for prostitution, which in turn provides the demand for sex trafficking. It importantly carries the message that women’s bodies are not commodities and objects of men’s sexual gratification.

Sweden pioneered the law in 1999, and there has been a shift in public attitudes. The majority of men no longer consider it cool to buy sex, and those selling sex partner with the police in fighting any abuse and organised crime. Street prostitution has been halved and sex trafficking is almost non-existent.

Norway and Iceland (2009), Canada (2014), Northern Ireland (2015), France (2016), Ireland (2017) and Israel (2018) have since adopted this law. South Africa could be the first African country to adopt it and join this growing trend of law reform to address patriarchy and promote gender equality, and more importantly to end the commodification of women and gender based violence.

Within the context of poverty and high levels of unemployment, South Africa needs to seriously consider the Equality Law as the only rational policy choice to end gender based violence.

There has been progress with the South African Law Reform Commission (SALRC) releasing its final report on Adult Prostitution. It includes a form of the Equality Law as Option One. The Commission strongly rejected total decriminalisation as an option and outlined among the reasons the fear that it would expand the sex industry and the extent of abuse and gender based violence instead of curbing it.

At its 54th Elective Conference the ANC passed a resolution that “The calls to decriminalise Sex work must be subjected to a high level discussion and engagement with relevant multiple stakeholders, and to continue to engage society on this to determine the societal norm. Sex workers must be protected.”This  is consistent with the Equality Law, and it is significant that it does not state that sex buyers, pimps and brothels must be protected from the law.

In addition Embrace Dignity petitioned Parliament to investigate the harms of prostitution and legislative frameworks that would address these harms. The Petitions Committee of the NCOP issued its final report on our Petition after public hearings and a trip to Sweden to study the Equality Law there. They unanimously adopted the report.

The present prohibitionist  system of total criminalisation, even with diversion, is not the answer as it does not address the fundamental factors that drive women and other marginalised bodies into prostitution and it does not have a clear strategy to address the issue. It is those who are harmed and exploited in the system of prostitution who are inevitably blamed and stigmatised.

Total decriminalisation or the ‘sex work’ position would be a disaster for South Africa as it would expand the exploitative sex industry and give free reign to the abuse of the vulnerable. It would turn South Africa into a pimp state. Prostitution cannot be considered work. It would be wrong for the poor to be offered prostitution as a solution to the problem of unemployment.

My call to South Africa is to pass the Equality Law now and end gender based violence. Do not turn South Africa into a pimp state.

Your ticket for the: Op-Ed: A Call for South Africa to pass the Equality Law now and END Gender Based Violence