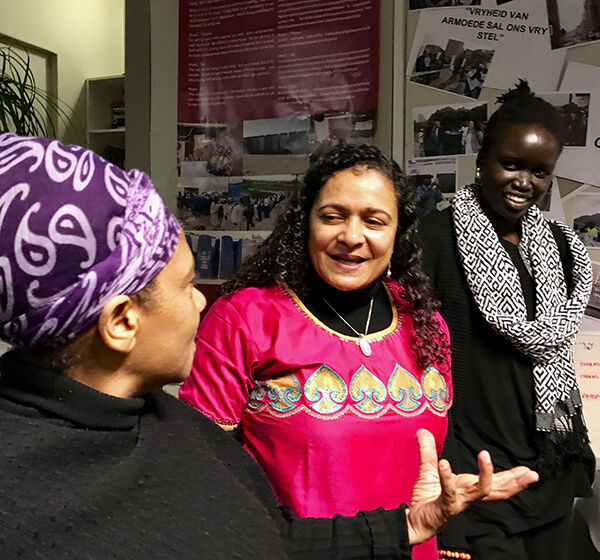 Bernedette Muthien (centre), an independent facilitator and researcher, recently addressed a Roundtable on Gender which formed part of the Parliament on South Africa’s High Level Panel on Legislative Review in Johannesburg. With her here is Ms Akuol De Mabior, an Embrace Dignity board member.

On 27 July Ms Bernedette Muthien[1], an independent facilitator and researcher, and Ms Duduzile Ndlovu, Embrace Dignity’s Public Education and Advocacy Coordinator, addressed a Roundtable on Gender which formed part of the Parliament of South Africa’s High Level Panel on Legislative Review in Johannesburg. This is a transcript of the presentation[2] made by the two women. The presentation is necessarily simplified and brief to conform to this specific format.

The presentation discusses two existing laws related to the selling and buying of sex so as to locate these laws in South Africa’s Constitution and other gender-related legislation and policy, along with possible legislative review or new legislation, underpinned by a few international examples.

The two laws relating to the selling and buying of sex are:

The 2007 Amendment Act assumes that sellers are equal to buyers, traffickers and pimps. The majority of sellers are women, supposedly equal to the majority men buyers and dealers. Most sellers of sex are poor women, while the men buyers and traders either have economic means to purchase sex, and/or financially benefit from the sex trade. Hence criminalising both buyers and sellers assumes equality of choice, agency and socio-economic status between majority poor women sellers, and the majority male buyers and traders of at least some economic means. In fact, the sellers in Africa are majority black (of colour or not-white), destitute, often trafficked within South Africa, Southern Africa, Africa and the world. These women are stigmatised and abused, whereas buyers and traders are favoured, including by the police, who usually arrest the seller but not the buyer, and at times rape and otherwise violate the seller, thus perpetuating societal gender inequity and gender violence.

These two existing laws of 1957 and 2007 address only supply, and not the demand, of sex. This demand is based on gender inequity, social inequity, economic inequity, and their intersections. What is needed is legislation to shrink the demand.

South Africa’s Constitution aims to protect especially women, and as a country we are hence obliged to provide exit, including skills training, job opportunities, education, and destigmatisation. The Criminal Justice System needs training, for example the Domestic Violence Act of 1999 which stipulates the obligations of all parties, including the police to counsel and support the complainant.

While progressive, the 2007 Amendment Act shows no shift to criminalise demand. A 2009 article shows that of 3 385 sellers arrested, only 10 buyers were arrested over the same time period[1].

There are two arguments to more effectively address demand, to fulfill our Constitutional and other imperatives for gender equality, human dignity and human security:

In the Republic of Ireland the activities of the sex seller is entirely removed from the very definition of sex selling, so that the seller is not illegal or criminalised or stigmatised. This flips inequality on its head, instead criminalising and stigmatising demand (the buyers, pimps and traffickers).

There is a case for new legislation, and a repeal of pre-existing laws especially Apartheid-era laws, to pull all related existing laws into one document or vehicle, and to be unambiguous, including on prescriptions like the Domestic Violence Act of 1999 which obliges, for example the police to be suitably trained and to counsel and support the complainant.

Whether amending existing legislation or promulgating new legislation, the demand needs to be addressed and should be in keeping with the country’s Constitution and other legislation and policy.

Countries that have worked towards eradicating demand include Canada, France, Iceland, the Republic of Ireland and Northern Ireland, Norway, and Sweden since 1999, with more countries joining each year. The legislation is variously called the Nordic Law, due to the majority Scandinavian countries leading the way; the Sex Buyer Law because the buying rather than the selling of sex is criminalised; and the Equality Law because it addresses gender and socio-economic inequity.

With these laws the buying of sex is criminalised, along with criminalising everyone that benefits from the sex industry including pimps, brothel keepers, traffickers and others. Simultaneously selling of sex is decriminalised, with support and exit services offered to sex sellers.

As an aside, one cannot but acknowledge that also addicts of sex and pornography, whose addiction is a global challenge underpinning the demand created by the sex trade, need support and services to rehabilitate.

The underlying assumption is that without demand, there is no need for supply. Besides, is South Africa with its groundbreaking Constitution a country that sells vulnerable girls and women and dehumanises them as slavery did? Or are we a country that strives to offer decent job opportunities, human dignity and human security? Hence we need to transform our mindsets and attitudes in line with our country’s Constitution, legislation and policy.

Sweden, since promulgating its legislation in 1999, has seen a radical decrease of street prostitution of between 30 and 50%, and a concomitant decrease in up to 80% of buyers[1]. This has of course resulted in an associated rise in sex selling in countries adjacent to Sweden.

Indeed, instead of levelling stigma against sex sellers, the law has created a shift in public opinion so that the buying and buyers of sex are now increasingly stigmatised, in a similar way to how rapists and batterers are stigmatised.

Sweden can be contrasted with Germany, which has chosen legalisation (with regulation), with an attendant rise in trafficking and other forms of criminality. This is reminiscent of South Africa during the 1990s with our porous borders resulting in an influx of global mafia, of corporatised exploitation and crime, which we are still combating at present.

The ultimate aim of this proposed legislation, to criminalise buying and decriminalise selling, is of course to end the commercial sex trade in its entirety, since it is rooted in gender and socio-economic inequity, and since it contravenes South Africa’s Constitution and other legislation and policy.

These provisions to eradicate the sex trade relate directly to the United Nations’ Sustainable Development Goals (SDGs), the African Union’s Agenda 2063, and South Africa’s NDP and government’s Medium Term Strategic Framework (MTSF) with its 14 Outcomes. South Africa is compelled to regularly report against all these international, regional and national policies, which the Department of Planning Monitoring and Evaluation (DPME) is working on simplifying and streamlining.

The appropriate United Nations’ Sustainable Development Goals (SDGs) pertaining to eradicating the sex trade include at least half of the 17 Goals:

The African Union’s Agenda 2063 with its seven associated Aspirations, of which six are relevant to ending the sex trade:

Thus creating an enabling environment for ending the sex trade runs across most of the UN’s SDGs, the AU’s Agenda 2063, as well as South Africa’s NDP and MTSF, including combating poverty, providing job opportunities, education, social protection, health and wellbeing, housing, and efficient local and national government. Hence ending the sex trade is critical for South Africa’s achievements related to these Outcomes, Aspirations and Goals.

Ending the sex trade would be achieved through the proposed progressive legislation that criminalises buying and decriminalises selling of sex, which can then form part of South Africa’s impressive arsenal of laws against gender-based violence and violence against women and children, including our Domestic Violence Act of 1999, to show perpetrators that South Africa is serious about fighting the vicious wars against our most vulnerable, impoverished girls and women: there simply is no excuse for abuse.

[1] Bernedette Muthien is an independent facilitator and researcher who has worked in local and international NGO management, academia and government. For more on Muthien visit http://whoswho.co.za/bernedette-muthien-8318.

[3] Oppenheimer, E. (2014). Prostitution as the Exploitation of Women and a Violation of Women’s Human Rights. Masters thesis. University of Cape Town.

Your ticket for the: The Global Sex Trade: Criminalise Buying, Decriminalise Selling