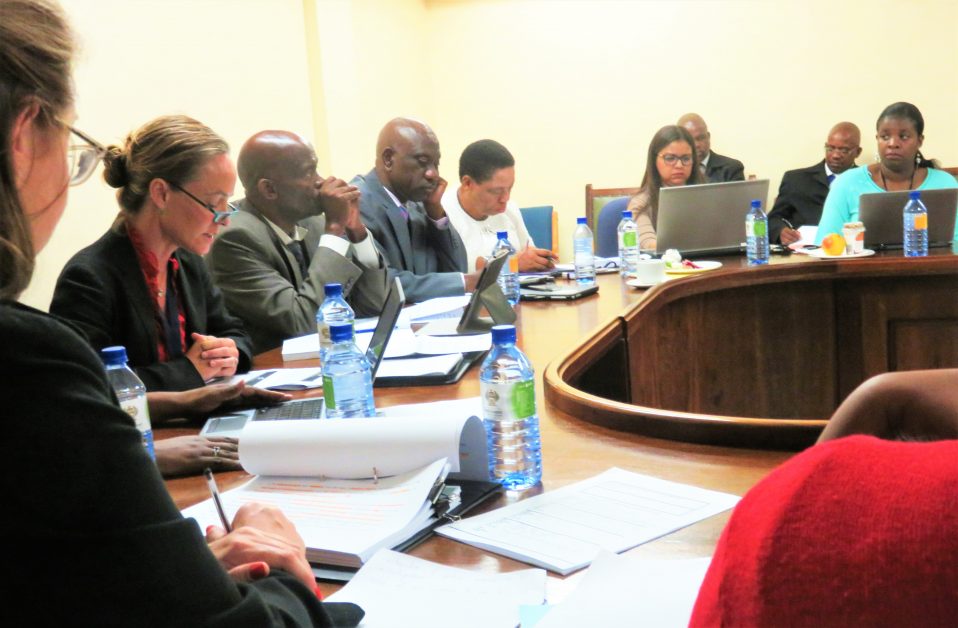 The spirit of Saartjie “Sara” Baartman runs deep in South Africa. In the early 19th century, a Dutch farmer near Cape Town enslaved Sara and, a few years later, a British doctor took her to Europe. A KhoiKhoi woman with protuberant buttocks and genitalia the British deemed proof of an over-sexualized being, Sara was branded a freak of nature and exhibited in London’s Piccadilly Circus. After the novelty wore off, Sara’s owners prostituted her and showcased her in rich Parisian homes, inviting guests to touch her naked body as entertainment. Sara died of alcohol-induced and other illnesses at age 26.

Today, a handful of South African centers serving women survivors of abuse are named after Sara Baartman. They struggle to meet immeasurable needs in a country with one of the world’s highest rates of sexual violence. South Africa has strong domestic violence and sexual offences laws, yet the rate of gender-based violence has exponentially increased in the past twenty years. Human rights organizations call South Africa the “rape capital“ of the world. This tragic classification does not include women and girls purchased in the sex trade.

Prostitution, one of the most brutal forms of male-perpetrated sexual abuse, is illegal in South Africa. While corrupt police are known to arrest and brutalize the women for loitering, buyers of sexual acts are rarely arrested.

The South African Law Commission is about to publish recommendations for reforming the law on prostitution. The Commission will advise the government on which of the three major legal frameworks to adopt: maintain the total criminalization of what it calls “adult prostitution”; decriminalize or legalize the sex trade, including pimping and sex-purchasing; or choose the “Equality Model,” which only decriminalizes prostituted individuals. France recently enacted the Equality Model, holding sex buyers accountable for the harm they cause while offering comprehensive services to prostituted women.

Among the South African organizations supporting the Equality Model is Embrace Dignity, a grassroots non-profit in Cape Town that advocates for the rights and safety of trafficked and prostituted women and girls, who are victims of a lethal mix of dire poverty, the low status of girls, and abuse of power. With its allies, the group is urging the government to adopt a law promoting principles of equality, protection and dignity enshrined in the South African constitution.

A few miles from the breathtaking splendor of quasi white-only neighborhoods and the golden coast of Cape Town is Khayelitsha, an impoverished shantytown, where most of Embrace Dignity’s clients or “sisters” live. There I met Zanele*, a shy but resolute sex trade survivor who works with Embrace Dignity.

“What I wanted was go to school and get skills to make a living,” said Zanele who is now 22 and was sex trafficked at 16 years old, a status that did not melt away when she came of legal age. “Everyone who sells her body has to take drugs or alcohol to do it. It’s not a job and if prostitution becomes legal here, it means your daughters will do it too.”

Sex buyers are the bedrock of the highly profitable sex trade; without them the sordid multi-billion dollar business would collapse and sex traffickers would have no place to park its prey.

Also, while the Commission presupposes severe penalties for those who commercially sexually exploit children, it excepts adult prostitution. How will the government identify “adult prostitution?” Will there be protocols asking prostituted women their age of entry into the sex trade, histories of childhood sexual abuse and whether they have pimp-boyfriends? What systems will be developed to discern 17 year-old sex-trafficked children from 18 year-old “consensual ‘sex workers’”? Will these procedures include nightly brothel checks for identification? If so, South Africa would quickly find that the percentage of those who truly “consent” to prostitution is infinitesimal. Minimal research on the horrors unfolding in countries that have either legalized or decriminalized the sex trade would enlighten the government about the true meaning of “consent” to prostitution.

“Women die at the hands of their buyers, the police and their pimps,” said Soraya Mentoor, executive director of Embrace Dignity. “I fear witnessing an increased number of coffins built if the South African government legalizes prostitution; sexual violence will be for sale with impunity.”

The British abolitionists who campaigned for Sara Baartman’s freedom faced many of the same challenges presented today in addressing sex trafficking and prostitution. Sara traveled to Europe of her own free will, people said. She testified in court in her trafficker’s favor, a trauma-triggered response that probably prolonged her ordeal. Instead of accepting the sex trade as an inexorable component of society, we must rip apart the poisonous recipe that colonizes both the earth and women’s bodies: I see, I want, I invade, I own. And when prostitution is involved: I justify as inevitable.

Today, from Washington, D.C. to Nairobi, increasing calls for a free market approach to the sex trade willfully ignore the deaths and unspeakable harms suffered by prostituted people at the hands of sex buyers and exploiters. Like the voyeurs at Piccadilly Circus, we are applauding or silently accepting the commodification of women’s bodies, indifferent to their stories of despair and brutality.

President Nelson Mandela succeeded in repatriating Sara Baartman’s remains almost 200 years after her traffickers first sold her and stripped her of her human dignity. In Sara’s memory, South Africa must urgently provide its forgotten daughters with viable alternatives to the sex trade and teach its sons about harmful masculinities. It has the opportunity to become the first African country to adopt an Equality Model, recognizing that prostitution destroys lives and human rights. As Madiba once said, “Freedom cannot be achieved unless women have been emancipated from all forms of oppression.”

*Not her real name

This article was first published in the Huffington Post at http://www.huffingtonpost.com/taina-bienaime/decriminalizing-prostitut_b_10693526.html? and it is republished here with the permission of the author.

Your ticket for the: Decriminalizing Prostitution In South Africa: A Recipe to Extinguish the Legacy of Sara Baartman