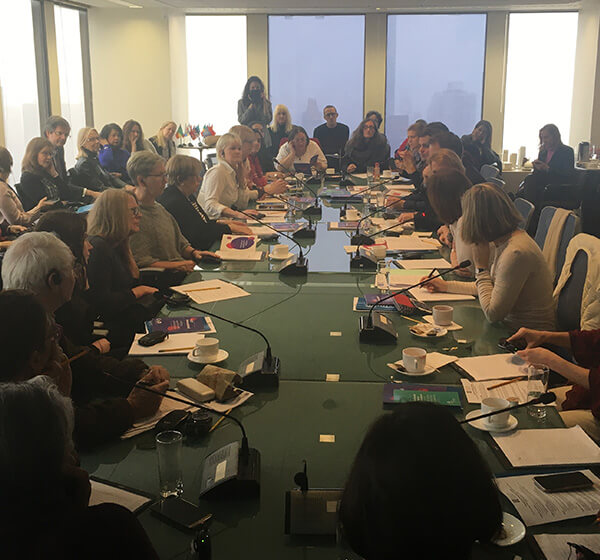 Over the last three months Embrace Dignity engaged with various international organisations fighting against prostitution and sex trafficking across the globe by attending two conferences hosted in India and the United States.

CAP (Coalition for the Abolition of Prostitution) International’s The Last Girl First: Second World Congress Against the Sexual Exploitation of Women and Girls was held in New Delhi, India, from 29 to 31 January while the United Nations’ (UN) Commission on the Status of Women (CSW61 2017) was held in New York in the United States from 13 to 24 March.

More than 400 civil society representatives, leaders and decision makers from 30 countries and five continents attended, including survivors of prostitution and representatives of the most marginalised women and girls – this includes indigenous, low caste, migrant and minority women as well as women of colour. In addition, a number of youth, and representatives from various student movements, trade unions, the new technologies sector, and members of parliaments from various countries were present.

“The purpose of the congress was to discuss various ways to end sexual exploitation and trafficking of marginalised women and girls across the world. Throughout history these women and girls have been the most systemically disadvantaged groups and have formed the largest group of persons to be sexually exploited and prostituted,” said Madlala-Routledge, who attended the congress along with Embrace Dignity staff members, Pumla Qambela, Grizelda Grootboom, and volunteer Morven Magari from the United Kingdom.

“This Congress helped to further strengthen the transnational movement of organisations advocating to put the last girl – a reference to those who are marginalised and often thought of last – first in their respective countries.”

A month later, Madlala-Routledge, Grootboom, and another Embrace Dignity staff member, Mickey Meji, attended the sixty-first session of the UN Commission on the Status of Women which took place at the UN Headquarters in New York. Representatives of the UN Member States, entities, and Economic and Social Council (ECOSOC)-accredited non-governmental organisations  from all regions of the world attended the session. The theme of this year’s session was Women’s Economic Empowerment in the Changing World of Work.

“This theme was of particular interest to us as we believe that to address women’s economic empowerment is fundamental to their economic freedom and to preventing their commercial sexual exploitation.”

There has been an ongoing discussion, within the UN and elsewhere, about whether or not prostitution should be viewed as a profession. For this reason, the term sex worker is often used in these discussions. During a panel discussion which was held by the Coalition Against Trafficking in Women (CATW) and titled Wanted: Economic Empowerment and Equality, Not the Sex Trade – Women from the Global South and Indigenous Communities Speak Out, Embrace Dignity staff members, Mickey Meji and Grizelda Grootboom, who also served as panellists, spoke out strongly against this notion of prostitution.

“The inherent harms of prostitution and its perpetuation of gender-based violence make it impossible to recognise it as a form of work and all the speakers were in agreement about this.”

Speaking at the UN Security Council Open Debate on Trafficking in Persons in Conflict Situations: forced labour, slavery and other similar practices, Åsa Regnér, the Minister for Children, the Elderly and Gender Equality in Sweden stressed the importance of not creating legal markets for human traffickers. She said: “Swedish policy on this issue is clear. Prostitution can never be regarded as a job; prostitution is always exploitation. Sweden urges more countries to consider legislation that targets the person who buys sex and offers support to the person being exploited – thereby shifting the criminal focus and guilt from the person being exploited to the exploiter. Knowledge about one’s own rights, including about sexual and reproductive health and rights, is crucial.”

While the first and much anticipated official abolitionist side event, When victims matter: ending demand for prostitution and trafficking for sexual purposes, was cancelled at the last minute, Madlala-Routledge , together with Mickey Meji and Grizelda Grootboom attended a side event at the Permanent Mission of France to the  UN which also included Åsa Regnér, the Swedish Minister for Children, the Elderly and Gender Equality; Laurence Rossignol, the French Minister for Families, Children and Women’s Rights, and Per-Anders Sunesson, Sweden’s Ambassador at Large for Combatting Trafficking in Persons in the Ministry of Foreign Affairs During this event, CAP members, which include Embrace Dignity, provided short introductions on the situations in their respective countries and on their work.

“We concluded our visit to New York with a strategic meeting at the Permanent Mission of Sweden to the UN where we met with Ms Margot Wallström, the Swedish Minister of Foreign Affairs. This meeting was arranged by CAP International and Donor Direct Action and provided Embrace Dignity with a great opportunity to share our vision, mission, and our activities in South Africa to have the Equality Law enacted.”

Your ticket for the: Creating A Global Footprint