Building on our 2016 successes 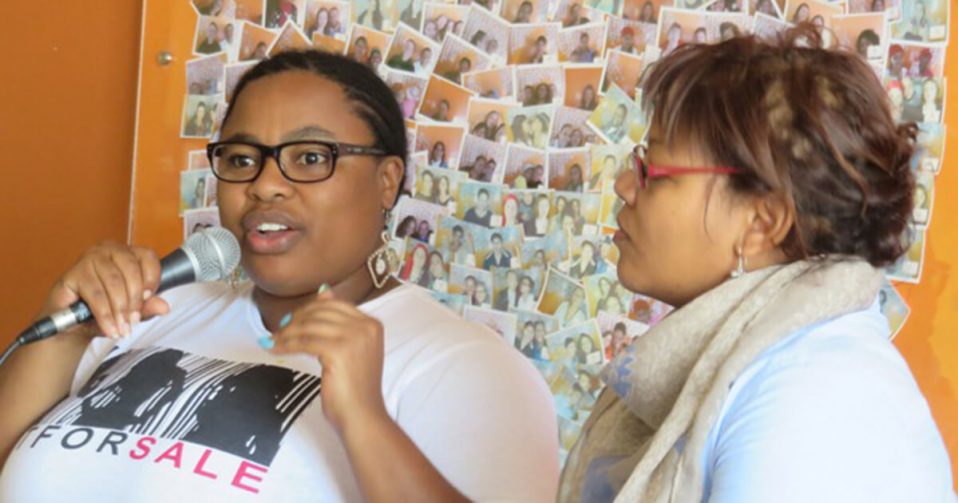 We were involved in a range of exciting initiatives in 2016 and accomplished much in last year. Along the way we learned many lessons as we strived towards the goals we set at the beginning of the year alongside fellow staff and Board members, Sister Survivors, stakeholders and friends all over the world. We will continue to apply these lessons as we build on what we have learned in 2017.

In March 2016, our former Executive Director, Soraya Mentoor, was invited to serve on a panel organised by the Coalition for the Abolition of Prostitution (CAP International) at the Commission on the Status of

We were involved in a range of exciting initiatives in 2016 and accomplished much in last year. Along the way we learned many lessons as we strived towards the goals we set at the beginning of the year alongside fellow staff and Board members, Sister Survivors, stakeholders and friends all over the world. We will continue to apply these lessons as we build on what we have learned in 2017.

In March 2016, our former Executive Director, Soraya Mentoor, was invited to serve on a panel organised by the Coalition for the Abolition of Prostitution (CAP International) at the Commission on the Status of Women (CSW60), held in New York City in the United States. Mentoor, along with Ruchira Gupta (Founder and President of Apne Aap Women Worldwide in India) and Zoya Rouhana (Founder and Director of KAFA in Lebanon) shared the extent of sexual exploitation of women and girls in their respective countries and regions during this trip.

In the months that followed, we successfully completed the last phase of our Exit Programme. We are currently in the process of collating all the data, which will inform the comprehensive Exit Model we are creating. The Model is a tool that can be used as a reference or guideline for other organisations or government departments aiming to implement exit strategies for women in prostitution or sex trafficking. We plan to share the Model with our government with the hopes that an Exit Programme will be incorporated into the legislation governing Adult Prostitution, no matter what model is implemented in this country.

After our mid-year review in June 2016, we embarked on our new Strategic Plan, which guides Embrace Dignity in its quest to become the leading voice in South Africa advocating for the Equality Model to be adopted by our President, Mr Jacob Zuma.

In this regard, we have:

In early November 2016, Embrace Dignity and Equality Now Kenya hosted a four-day conference to look at emerging legislative measures to combat sex trafficking. This was held at the Lagoon Beach Hotel in Cape Town, South Africa. This unique gathering brought together professionals and activists from eight African countries working to end sex trafficking and prostitution in Africa.

“One of the objectives of the meeting was to identify ongoing law reform initiatives in different countries regarding sex trafficking and prostitution, and to foster collaborations and partnerships between participants with the aim of identifying shared objectives to address sex trafficking and prostitution in select countries in Africa,” says Nozizwe Madlala-Routledge, Executive Director of Embrace Dignity.

The most visible accomplishment of 2016 was the launch of our Survivor Initiatives. Through this initiative, we were able to support Sister Survivor, Grizelda Grootboom, who completed and launched her book, EXIT!, in early February. EXIT! has been well-received by the public with Grootboom’s story shared on and in various media (TV, radio and print). During 2016 she also completed a contract with the Gauteng Department of Health where she was involved with their 16 Days of Activism for No Violence Against Women and Children campaign.

Mickey Meji, an experienced activist who previously worked for SWEAT, is also being supported by Embrace Dignity while she establishes her non-profit organisation, Survivor Empowerment and Support Programme (SESP). At the same time, Meji is in the process of also initiating a survivor movement called Kwanele, which will be spearheaded by Sister Survivors. To this end, she facilitated a four-day workshop to mobilise Sister Survivors and to educate them about the four different legal frameworks which are: total criminalisation (the status quo in South Africa), non-criminalisation (also known as total decriminalisation), legalisation and partial decriminalisation (pioneered in Sweden and also known as the Nordic or Equality Model).

A third Sister has launched an online funding initiative for a much-needed Dignity House which will serve as a transitional shelter for people wishing to exit prostitution. She has also secured a contract with the City of Cape Town to conduct workshops to raise awareness about prostitution at various Cape Town schools in 2017.

On 25 November, Embrace Dignity hosted an event which included a panel discussion focused on the ongoing trauma experienced by women wishing to exit prostitution. Val Kadalie, CEO of City Mission, and Madlala-Routledge were joined by Nomathamsanqa Thema Tsilite (Survivor) and Sibusiso Banda (a former inmate who now heads up City Mission’s Ex-Offender Programme) in this discussion.
Vera Qwesha, the author of My Journey: From Grass to Grace also shared her own exit journey. Her book has been hailed as an ‘inspiration and a warning’ by Independent Online (IOL) and tells the story of her transformation from a life of prostitution and drugs to that of a motivational speaker and successful businesswoman.

On the same day, we also launched our new website, which will help us to engage more effectively with all our stakeholders, and unveiled our more modern-looking logo. This is the logo that you will now see on all our branded materials in future.

Following Mentoor’s departure, Madlala-Routledge returned to Embrace Dignity in October to once again take the lead at organisation.

“We ended off the year by launching our #IAmNot4Sale campaign as well as garnering support for changes to the laws governing prostitution through a petition which we will handover to President Zuma as soon as we have gathered enough support,” explained Madlala-Routledge.

“With the success of our Exit Programme, and the launch of various new strategies, projects and initiatives in 2016, last year proved to be a truly successful year for Embrace Dignity. As we look at all the exciting things we have lined up for 2017, we are positive that we will have yet another successful year in which our efforts to positively change the lives of people in prostitution will reap great returns again.”

Your ticket for the: Building on our 2016 successes

Building on our 2016 successes