Advocating At The Community Level 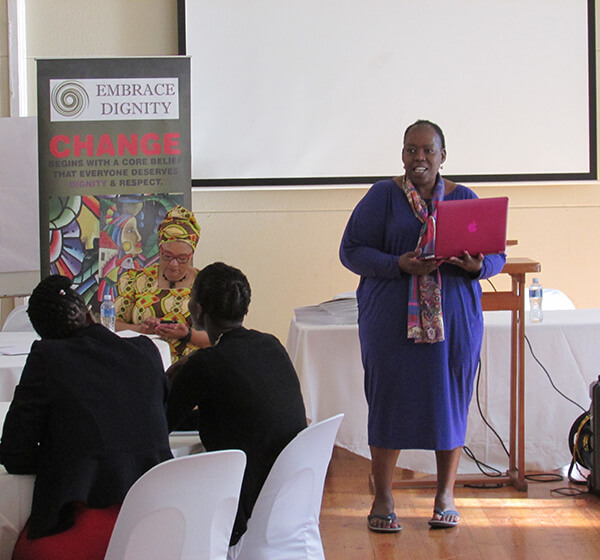 Mobilising prostituted persons to advocate for their rights across South Africa

Mickey Meji, responsible for Civic Advocacy, the Survivor Empowerment and Support Programme (SESP) and Kwanele, recently spent two weeks in the Eastern Cape and Gauteng along with Embrace Dignity Communication and Social Media intern, Thabo Tshelane, Executive Director, Nozizwe Madlala-Routledge, and Promise Mthembu, a consultant on gender and women’s rights, to engage in dialogue with gender activists and to train survivors and prostituted persons on advocating for their rights.

Embrace Dignity and Masimanyane Women’s Support Centre co-hosted the two-day community dialogue in East London. Participants came from urban and rural areas across the Eastern Cape and included women working against gender based violence, the youth and civil servants from the South African Police Service, Social Development and Public Prosecutions. “This was the first of a series of outreach activities Embrace Dignity plans to conduct in different parts of the country,” said Meji.

“The broad objectives of the meeting was to raise awareness about the socio-economic issues that drive people to prostitution and to help them think about ways to address these issues effectively, change attitudes towards prostituted women and identify the role their organisations can play in ongoing law reform discussions and the overall programme to change our society,” added Meji.

Participants were introduced to current legal frameworks governing prostitution around the world and to the law reform process in South Africa. They then evaluated the legal frameworks for appropriateness for South Africa, particularly focusing on the Equality Model Law which has gained traction in a number of countries recently.

“Participants were therefore encouraged to engage with the Equality Model Law and to discuss their own concerns about it,” said Meji.

Participants and the organisations represented at the meeting, who also form part of the Ikhwelo Women’s Advocacy Network, agreed to join and support Embrace Dignity’s work as a collective going forward.

“This is well-developed network with direct access to the legislature, members of parliament, relevant parliamentary portfolio committees, and policy makers at provincial and national level. They also have years of experience of working at these levels and a huge support base as most women’s organisations in this province belong to the network.”

At present, the network focuses on advocacy work related to the Traditional Courts Bill and Child Marriage-Ukuthwala, however, following the meeting, it was agreed that the network would also now start focusing on the issue of prostitution and advocate for the Equality Model Law.

“The network will now incorporate advocacy activities focused on prostitution and sex trafficking in their strategy and work in close collaboration with Masimanyane and Embrace Dignity to do so,” added Meji.

The team also visited Johannesburg to meet with Kwanele provincial organisers to develop and mobilise a Survivor Movement in a four-day workshop held with Survivors of prostitution. The purpose of the workshop was to provide leadership training for the organisers as a step towards building a Survivor Movement.

“We also developed activities that we could rollout under a Kwanele campaign at local and provincial level,” said Meji.

Sixteen female participants, including young and old survivors from the Eastern Cape, KwaZulu-Natal, Limpopo, Mpumalanga and the Western Cape, signed up for the workshop.

“The workshop was a major first milestone in organising and building a movement of survivors who can participate meaningfully in advocacy for law reform. All the women who were at the workshop were Survivors who were working or had worked in the streets. It also became clear that there is a need to bring on board women who are working in brothels and those who are trafficked. It might be hard to achieve this but not impossible and will assist us in our work, as it will bring different nuances and voices to the table,” said Meji.

The participants were also taken through a practical demonstration of how to use different social media platforms for advocacy work.

Your ticket for the: Advocating At The Community Level

Advocating At The Community Level